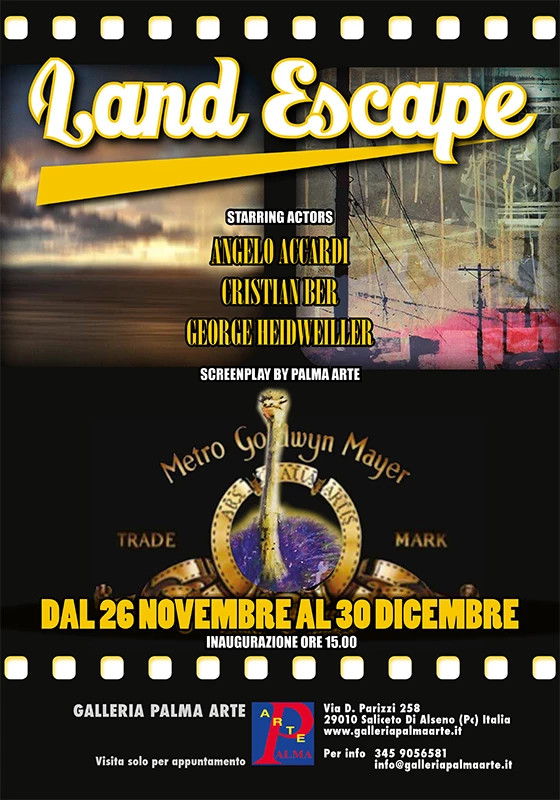 From Saturday November 12th Palma Arte will open the stage for the exhibition "Land-Escape". An escape from the ordinary starred by Angelo Accardi, Cristian Ber and George Heidweiller. Three artists who combine a profound need of transgression and evasion from reality. A gathering of different settings without defined contours, suburban emotions and noir shades which take us into a post-modern world.


Angelo Accardi, born in Sapri (Salerno) in 1964. He became today one of the most interesting artists on the national scene for his perennial stylistic pictorial urban research, intriguing, introspective, never banal. Cities, streets, ostriches, aircraft, ships, interiors, all in one view of the world. An artistic journey of the highest level which led him to partecipate to the 54th edition of the “Biennale” of Venice, Italian Pavilion.


Cristian Ber was born in Palmanova, he lives and works in Udine. In 2005 was a finalist for the Premio Celeste in the "Premio medial painting". In 2009 he went in Brisbane, Australia where he attended the South Institute of Technology where he produced specialized photographic documentation. In 2012 he was a finalist at the ARTE MONDADORI award in the field of photography and in 2012 he was a finalist for the award “Arte Spazio Bocca” in Milan. Today his artworks are the result of a careful and sophisticated way to process colors, of which the ink spray becomes a critical component.


George Heidweiller began his career in the '80s studying at the Royal Academy of Arts in The Hague, Netherlands. Shortly after finishing his studies the Dutch government commissioned two major works. At the time he was only 23 years old. Then he became a worldwide artist through travels, exhibitions and researches in order to refine his technique, which later became the symbol of Heidweiller. A masterly work of silkscreened images on canvas with acrylic applications, inks, and modern collage to create new landscapes with a strong vintage accent.