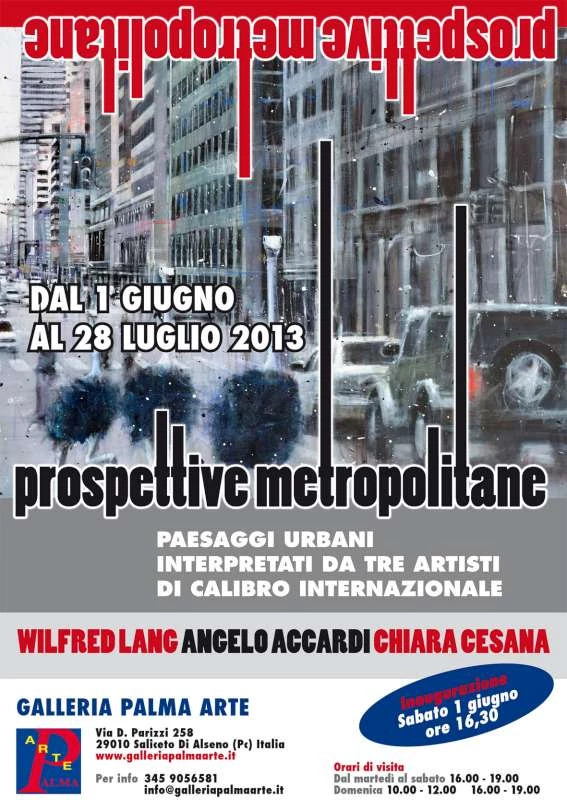 A project, an exhibition, a journey, an event. An exhibition that for the first time sees three international artists successfully represent the metropolis and all it entails. Corners of the city, visual interpretations of timeless emotions, metropolitan horizons in ambiguous hues, roads and skyscrapers from a seductive and complex prospective. Angelo Accardi Angelo Accardi, was born in Sapri (Salerno) in 1964. He has become one of the most interesting artists on the national scene today for his perpetual urban stylistic-pictorial quest, it is intriguing, introspective and never banal. Cities, roads, ostriches, aircraft, ships, interiors, an all-in-one view of the world. An artistic journey at the highest level, culminating with his participation in the 54th edition of the Biennale di Venezia, Padiglione Italia. Wilfred Lang Wilfred Lang was born in Shanghai in 1954 and lives and works in New York. Award-winning artist, he is known worldwide for his famous urban abstracts that reveal a keen eye for aesthetics combined with a thrilling three-dimensionality. His unique style reveals a rare use of colour integration techniques. He manages to get what the famous art critic F. Mayer calls "a sophisticated and original transition between realism and the abstract." Wilfred exhibits today at the most famous art galleries in New York, Barcelona, Hong Kong and in numerous European capitals. Chiara Cesana Chiara Cesana was born in Cerate, Brianza in 1977. She graduated from the Accademia di Belle Arti di Brera in 2002. Her paintings take shape, emerging from a space that is not limited to the canvas, but comes to life through a lush subject, colour and the use of a variety of materials. Chiara Cesana has been on the contemporary art scene both nationally and internationally since 2008.
Download leaflet