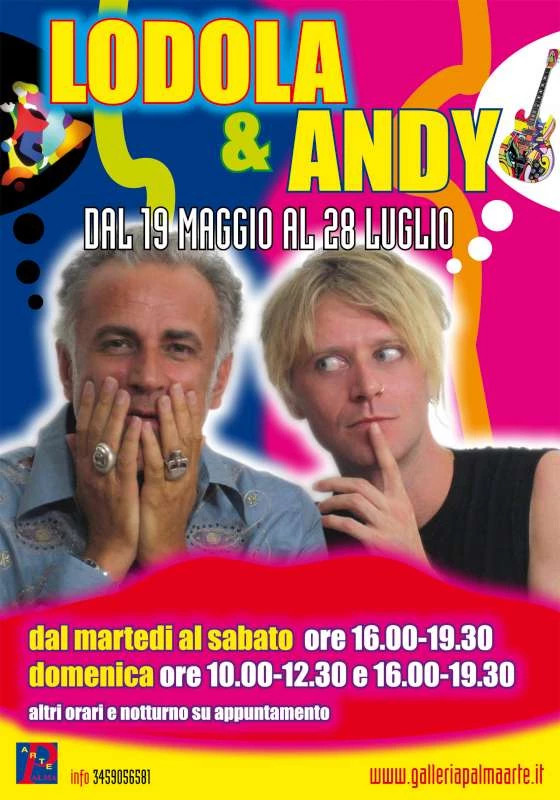 Lodola and Andy, a project that is a true multisensory and multidisciplinary event, focussing on the work of Marco Lodola and Andy, connected by friendship and by an innate neo-pop and futurist talent. This synergy inspires the works in the exhibition: the celebrated light sculptures by Marco Lodola intertwining with Andy’s evoking canvases and design objects. Continuing along the long path of figurative art with the tools of the so called “new media”, the new means of visual art: light, colour, movement and the metropolitan night-scape. MARCO LODOLA Marco Lodola, artist of light sculpture par excellence, was born in Dorno (Pavia, Italy) in 1955. In the early 80’s he founded the New Futurism movement with fellow artists in Milan. Since 1983 he exhibited in many Italian and European cities including Rome, Milan, Florence, Bologna, Lyon, Vienna, Madrid, Barcelona, Paris and Amsterdam. Since 1983 he has exhibited in major Italian and European cities such as Rome, Milan, Florence, Bologna, Lyon, Vienna, Madrid, Barcelona, ​​Paris and Amsterdam. He has participated in exhibitions and projects for major industries such as Swatch, Coca Cola, Ferrari, Titan, Grafoplast, Harley Davidson and Ducati In 2008 he set up the façade decorations for the Ariston and the Casinò on the occasion of the 58th Sanremo Festival singing contest and was in charge of the scene design for the movie “Questa Notte è Ancora Nostra” with Nicolas Vaporidis. In 2009 he set up 25 sculptures of music legends in Piazza del Duomo in Milan, for the Rock’n’Music Planet - the first Rock museum in Europe. He took part in the 53rd edition of Venice Biennale with the installation of “Balletto Platico” (Plastic Ballet), dedicated to the Teatro Futurista. In 2011 he participated once again at the 54th edition of the Biennale in Venice with a project entitled Ca’ Lodola, an exhibition edited by Vittorio Sgarbi. ANDY Andy was born in Monza in 1971 A brilliant art student all through high school, he received his formal training at Milan’s “Accademia delle Arti Applicate” in Milan, specializing in illustration and graphic design. Over the years Andy has consolidated his strong pictorial code and applies it not only to his paintings, but also to the decoration of objects of design, textiles, musical instruments ... thus developing a wide-ranging international career through the exhibition of his works in solo and group exhibitions making him known in Italy and abroad. All-round artist, Andy is also a talented musician: in the early 90s he founded Bluvertigo with Morgan, contributing with sax, keyboards, vocals and synthesizers in the making of three albums. He’s still very active in the music world conducting music programmes on both TV and radio. He is also the founder of FluOn, its headquarters and creative core, a name that sums up the philosophy of art and life: "FLU" as fluorescence and also the inFLUence, both to transmit and receive in a continuous stream and in constant "ON" mode.
Download leaflet