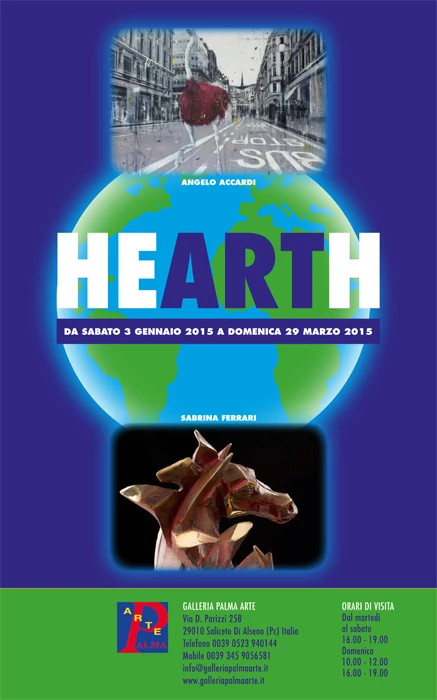 This Winter, including the Christmas period and the start of the New Year, Palma Arte inaugurates one of the most popular exhibitions on the contemporary Italian scene: “HEartH”.

The protagonists of this evocative and exciting exhibition are sculptress Sabrina Ferrari and the now world famous Angelo Accardi. A combination that alternates the much sought after “in motion” bronzes of this incredible artist, with paintings from the new collection by Angelo Accardi created with a new depth and perspective. Both artists are looking for new ways to communicate, through an unconscious search deepened by human emotion. Breaking the silence is the buzzword.

Sabrina Ferrari was born in Verona in 1970, where she currently lives and works. After graduating in 1989, she continued her art studies, graduating in academic sculpture at the Academy of Fine Arts "Cignaroli" in Verona in 1993, where she received first prize in Foundry at the Art students exhibition. She continued her education attending the school of marble sculpture at the institute "Brenzoni" in Sant'Ambrogio di Valpolicella (Verona). Upon graduation she began her work experience in Bronze Foundry Art collaborating with various European galleries.

Angelo Accardi was born in Sapri (Salerno) in 1964. He has become one of today's most interesting artists on the national scene for his perennial stylistic pictorial-urban search, it is intriguing, introspective and never dull. Cities, streets, ostriches, planes, ships, interiors, all in a single view of the world. An artistic journey of the highest level, culminating with his participation in the 54th edition of the Venice Biennale, the Italian Pavilion. Since 2012 he has participated in the most important contemporary art fairs around the world and his listing is considered by the specialized press one of the most interesting in relation to potential in the average term.

The HEartH exhibition opens December 21 at 15:00 and continues until January 24. The works presented will include those published in Sabrina Ferrari’s catalogue, and the new 2014/2015 Misplaced collection by Angelo Accardi.