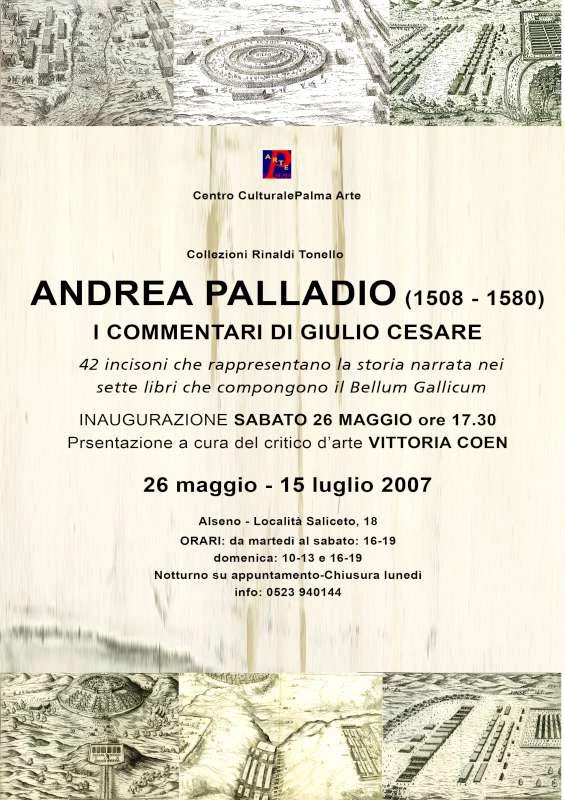 Andrea Palladio Commentari di Giulio Cesare Andrea di Pietro della Gondola from Padova started his career carving stone for local sculptors and Venetian architects. Parting from this humble work, he climbed the summits of celebrity not only with the patrons but also with the highest institution, the republic of Venice which made him Proto of the salt, a prestigious title. He had started the studies of classicism very early illustrating the “Commentaries of Julius Cesar”, making profound and passionate studies of classical architecture under the authority of Vitruvio, and of the work of contemporary architects, such as Bramante and the ever so famous Leon Battista Alberti, champion of classical architecture. The roman experiences together with humanist Gian Giorgio Trissino and the excursions in France and in Piemonte enriched his knowledge and made Trissino become Palladio a kind of official nomination to classical culture. Many of the terms appearing regularly in the history of art may seem ambiguous or equivocal needing some adjectives and prefixes to describe the works and facilitate their understanding. So this is classicism. But what kind of classicism? To Palladio it is clear, that his classicism is not the one immobilised by imitation and of an aesthetic per se. In this case also, the motives of pure form are not enough to allow an absolute characterisation. Palladio’s classicism is not only bound to a philological passion knowing and utilising the sources, but follows an ethical ideal (Mantenga) finding evident roots in classicism, with the perfection of the characters of civil life, a great lesson of civility, of Paideia, as one says using the classical Greek term. We can find here a perfect union of ethic and aesthetic. Palladio adds a fundamental factor, the interpenetration with the ethical and social environment, making part of a society in rapid expansion, solidly linked to the region, work and productivity as we would say today. The great villas of Palladio show a rich nobility and a bourgeoisie of entrepreneurs which do not try to impose themselves through the spectacular overabundance of the ornamental. The immense formal repertory of the artist tends to produce an ever innovating image. The architectural scene creates the pattern with a richness of the composition in harmony with common motives of Venetian architecture. Venetian commitence has precise aspirations: aesthetical constructions of a very high level, pleasing, functional linked to the way of life very often close to the rhythms and rules of the production activity especially in the countryside. And all is held by the rationality to which Palladio adds a particular presence of linearity in the abstraction. The Palladian villa takes account of the environnemental context and of practical convenience. We call those constructions rural only because of that, apart from the particular Villa Capra, la Rotonda. They are rural with an extraordinary elegance, hiding the utility a strange dimension one cannot repeat: one recognises immediately the style of Palladio. The low portico, the “barchessa” next to the central building, a deposit for agricultural products, allowing countless stylistic variants. This is Palladio, the rational link between necessity and convenience on the wave of a new idea, with the strong conviction of the necessity of this artistic language. There are also the engravings of the “Commentaries of Julius Cesar”. In the past the importance of this work by Palladio in the context of his artistic creation was discussed. It was qualified as marginal. But one can say on the contrary, that the author of the “four books on architecture” in which he examines, amongst others, a bridge over the Rhine, Cesar made his soldiers construct, an example of classical architecture (let us not forget Vitruvio) added as an illustration to the “Commentaries” not only for its technical particularities, but also for its true love for old souvenirs and the respect of the ancient models that were used. The humanistic artist, architect and town planner, also he is critical of the “ideal town” principle of the renaissance, wanted to be the scrupulous artisan of an operation of the memory and also in a certain way of the strategic science of war. A historical memory to create a sort of fare away archaeological side, most real in the perception of the details. Palladio rendered a context visible, helping it with the strength of the direct perception of the commander and the rigorous patience of the passionate exegete. Engraving is an ancient art known all over Europe when Palladio came to it, from Pollaiolo to Matenga, Schongauer, Dürer, Holbein the younger, Lucas Cranach and Parmigianino. He was an architect and a columnist, he rendered visible and analysed one of the most famous written monuments of antiquity. He illustrated everything; lodgings, wars and the important things to facilitate to the reader the understanding of history, as we can read in the 1575 Venetian edition. In this case the humanist architect is also or rather particularly scrupulous following geometrical precision. Looking at the layout of the roman camp, the deployment of the troops, the detailed description of the constructions, the Suisse encampment for instance, the attacks of the roman legions, cavalry, and infantry. Palladio examines all this in detail, this moving world where, although there is an evident impassibility, dramatic events, the same war the ruins of which we can still see today, of an abnormal life lived every day.